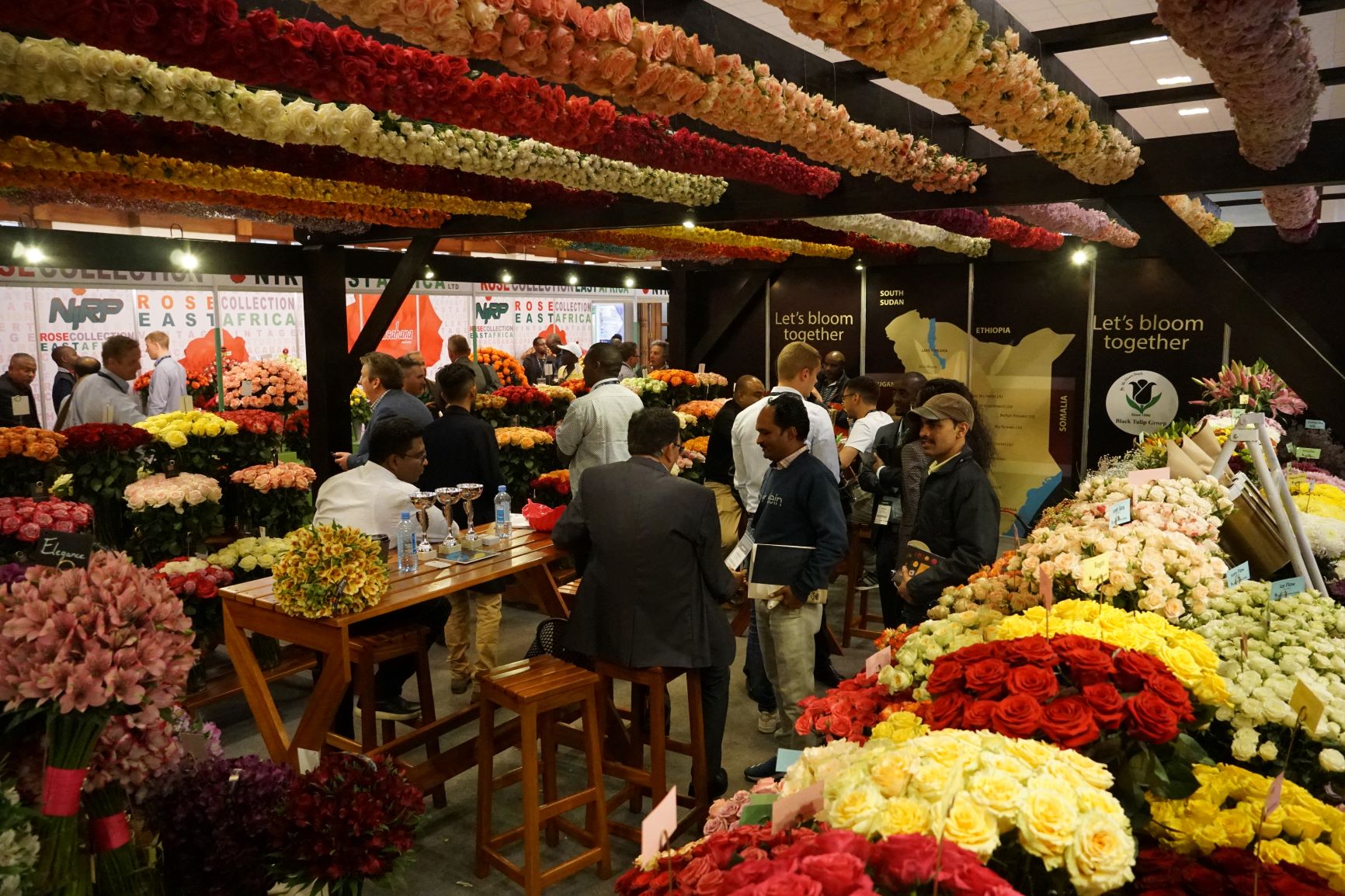 It’s a challenging time in Kenya’s flower industry, no doubt, with high commodity prices, low prices at Dutch auctions, adverse weather conditions affecting crop yields, and ongoing Brexit uncertainty (The UK is the second largest export destination for Kenyan grown cut flowers) creating difficulties for all stakeholders involved. Added to this is the amount of work, risk and frustration that comes with finding new direct export markets in North America and China.

Although less international flower purchasers attended the opening day, the quality of visitors was high, says event organiser HPP who back in 2001 was brave enough to set up a three-day B2B event with Nairobi’s Oshwal Centre being the venue of choice. Eight years on, the show has become an important fixture in the calendar of those active in the world of cut flowers.

Our man in the USA, William Armellini from sister publication Flowers&Cents was invited to attend the show, held in a nation, he thinks is “full of wonders and contradictions all laid out in front of you as you travel.”

Armellini has covered this show for the last three years, and once again, assembled a group of North American buyers and logistic companies to see the floral happenings in this part of the world, encouraged by the introduction of direct flights between Kenya and the US and growing interest in Kenyan flowers from Americans.

Internationalisation of Iftex steadily progresses with a growing number of cut flower companies from Ethiopia, Zimbabwe, South Africa, Rwanda and Uganda. Kenya, however, has the longest standing tradition in growing cut flowers for export which is mirrored by improved product quality.  “I have seen the flower quality improve each year and if the Ecuadoran’s think the Colombians are their competition beware of these African growers,” commented Armellini.

He and a team of fellow judges assigned the winner of this year’s Iftex Quality Competition. “It was quite a challenge to sort though and ultimately judge over 100 varieties of flowers and then determine the best stands. The exhibitors and growers take this very seriously and as a result we had to be diligent in our assessments,” said Armellin who thought that Lepidium ‘Green Dragon’ in trendy green colours and submitted by Danziger deserved to be mentioned for being an excellent filler flower.

The Gold for Standard Roses was won by Uhuru Flowers

The Gold for Garden Roses was won by Fontana- Diya

The Gold for Spray Roses was won by Sian Agriflora

The Gold for Assorted Flowers was won by Flora Delight

The Gold for best stand perishables was won by Omang & Amor

The Gold for best stand non-perishable was won by Koppert

The general feeling Armellini got from talking to many was that the growers have had a tough year with weather and low prices on the Dutch auction and even direct sales. “This stress is most evident when talking to the breeders who depend on healthy growers to make royalty payments.”

With this in mind, Kenyan growers are eager to find new markets and North America is the prize. “However, the logistics to reach this market are not favourable. Flowers must be flown via some point in Europe or UAE to reach Miami or a major city in the US. As a result the buyers are only picking certain products that might be scarce in South America or the US.”

There has been some progress in getting some direct flights but so far only to NYC three times per week, with a wide-body passenger plane which does not allow for very many flowers and those are subject to getting bumped by baggage or other priority cargo.

Over the past five years Kenya has developed a dual strategy for developing its export business with the Chinese market also clearly on the radar of Kenyan flower growers.

The opening of a new distribution centre in the China’s southern province of Hunan, a joint initiative of the Kenya Export Promotion Council (EPC), the Kenya Flower Council (KFC) and the Chinese trading company Funfree International, might be the first step in securing a long term future for the Kenyan Sino flower business, riding out recessions, bypassing Dutch flower auctions and reducing costs and of course increasing profits. China Southern Airlines, headquartered in the port city of Guangzhou, will be launching direct flights between Nairobi and Changsha

According to Business Daily Africa, a Memorandum of Understanding is expected to be signed this week as part the inaugural edition of the China Africa Economic and Trade Forum held in Changsha City, Hunan Province from June 27 to 29, 2019. At time of publishing  KFC’s Clement Tulezi was unavailable for comment.